In 1996 Mayoral started building up a network of Mayoral Concept Stores, opening that year the first franchised store in Spain.

After opening 15 franchises in Spain, in 1999, Mayoral inaugurated its first two own concept stores, both in Malaga, Spain.

The same year, the company Mayoral International Stores S.A. (MISSA) was established as a Mayoral sister company, in order to run the Mayoral Stores. This was the moment, when Mayoral really started to learn about the retail business.

Our Mayoral stores chain had undergone strong expansion, with new openings every year.

What do we contribute? 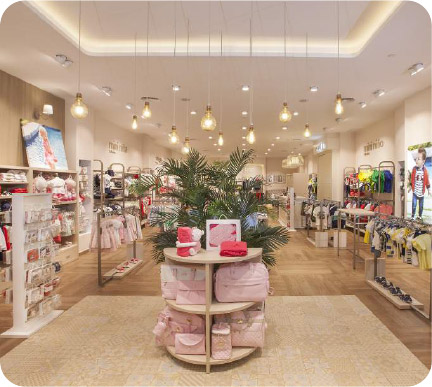 The Mayoral stores, located in shopping malls and commercial streets and with an average surface of 130 m2, offer the customer a complete and wide range of products, displayed in a coordinated way by studied trend, and always up-to-date.

We offer all type of clothes and accessories to dress kids from head to feet, and from zero up to 14 years old.

The collection is divided into the following sections:

The decoration of our stores has been changing throughout the years, looking at any time for a modern design and at the same time, a highly functional sale area, creating a pleasant atmosphere for our customers: parents and children.